I’ve become a little bit crazy about foraging for unloved natural foods available nearby. For a little over a year following a class given by Russ Cohen, we tried to find Autumn Olive (AO) in our area, checking out just about every bush with red berries nearby but coming up empty.

One day we tried a “story walk” with our toddler daughter in a nearby conservation area and bam! we happened on autumn olive bushes! Once we knew what the real plants looked like (they were talked about but not shown in Russ’ class), I came to see them everywhere. They’re very distinctive once you’ve found one. 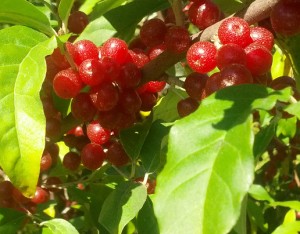 So, with the fruit everywhere and so easily gathered, the next challenge was to make something with it! At first, I tried the fruit leather mentioned in Russ’ book. Several gallons of berries became three quart baggies full of deep rich red fruit leather. Sadly, my wife isn’t fond of it – although our daughter shares my fondness for the tart fruity taste.

The same conservation area has a crab apple tree whose fruit was made freely available. One day we went picking and turned them into a very flavorful jelly that my wife is very fond of.

A friend heard of my fondness for AO and gave me a recipe for AO tart from Northern Woodlands magazine, which I made for a potluck at a contra dance and found wifey liked that (contained sugar where the fruit leather hadn’t).

I’d found another small crab apple tree while gathering the latest batch of AO for the tart, so I had some of those and a bunch of extra AO left over and was looking for something to use them up. There are very few unique AO recipes out on the web and even fewer for AO jam or jelly. I did come across one jam recipe that used commercial pectin, but I didn’t want to go that route and remembered how easily the crab apple jelly had naturally set. Seeing that I had several cups full of crab apples on hand, I thought I’d take a shot at coming up with my own combined Autumn Olive – Crab Apple jam recipe (despite this being my first time making jam, but hoping that combination might become a hit with all three members of our little family). 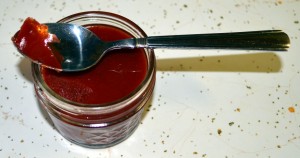 To my delight, it turned out great! Good flavor and a firm natural set with wonderful color. So here it is… 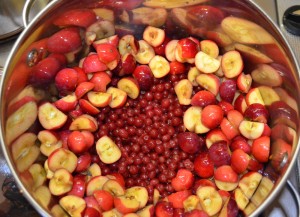 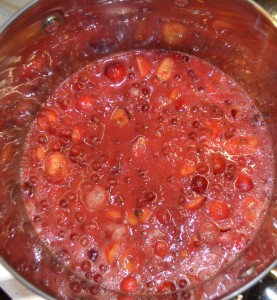 Empty the pot’s contents into a food mill and process to yield a cooked puree free of seeds and skins. To me, the appearance and texture was much like a good tomato sauce with slightly brighter color. (The crab apples I’d found were late season and grainy when raw, and some of that carried through into the puree.) 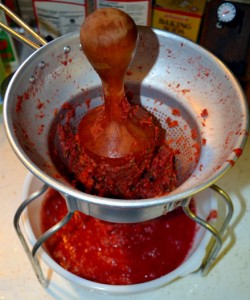 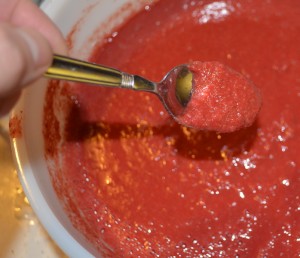 Put the puree into a clean pot with the sugar and bring to a rolling boil. (This being my first time with this recipe, I tried adding the lemon juice to help the set and added the sugar gradually until it seemed right.) Adding the coconut oil will help suppress the foam formed during the boil and save time later (some canning recipes use butter but that didn’t seem right to me, so I substituted the coconut oil successfully in both the crab apple jelly and this jam). Keep boiling until the mixture starts to “candy coat” the back of a metal spoon. The mixture is somewhat firm but still liquid at this stage.

Transfer the cooked jam to prepared canning jars and process normally (I used a quarter inch or so of head space processed in boiling water for 15 minutes), cool and store. Yield was almost exactly 12*4oz jelly jars and one pint jar of rich red firm set jam.

My daughter and I enjoy this jam a lot. My wife likes it less than the crab apple jelly (she seems to taste a “bitter” note in autumn olive fruit which we don’t). The grainy nature of the late season crab apples seemed to reduce with the further cooking, but there’s still a hint of it in the final jam. I look forward to trying to refine the recipe next year with earlier fruit, just hope the existing stock lasts that long!