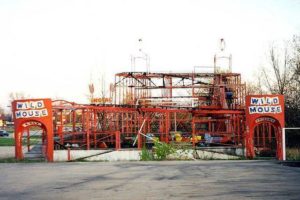 The Wild Mouse ride at Revere Beach, MA sometime in the 1960s or early ’70s

This sequence re-imagines the B parts from my dance Lobster Roll. I wanted to find another way of resolving a 4 Face 4 than has been done to date. Originally I thought of having the two Mad Robin (MR) figures be in opposite rotation with a cross-over (as in a figure 8) in the middle (a la the on the sides action in Sharon of the Green) but was concerned about the possibility of collisions while crossing.

The B1 “Experimental” bit below is my attempt to simplify the MR motion to be consistently in one rotational direction and avoid the collision issue by making the MR path for each dancer into something like a sideways “6” or “9”. The MR pieces in the B1 are in quarter multiples so the dancers can slide past each other across the set in the place between the couple dyads.

Once learned, I think this sequence will be easy to dance – given the Partners facing & associated guidance possibility in the B1 – but could be a challenge to teach!

The title of this dance comes from one of the last amusement park rides remaining at Revere Beach, Massachusetts in the late ’60s – that ride featured a series of loop-backs and sharp turns/feints that made it appear (at least to a ~8 year old) like you were going to fly off the track and land in the nearby Atlantic ocean! The B1 circuitous loops here made me think of that ride. Sadly, what was once quite a stretch of rides at that beach have since become an unbroken line of oversize condos forming a tall wall across from the sand.

A2
Rings/4 Balance, Gents Draw Opposite Lady Back & Swing

B1
(~4) Mad Robin CW 3/4x around Opposite, Gents L->R through center first (facing P up/down)
[so temporarily we have transitory columns of 4 up/down the set with Ladies face to face and two couples “outbound” to edge of set and two couples “inbound” to cross the set]
(~4) Outbound* couples continue MR 1/2 more, WHILE inbound* couples slide straight across set to other side (so Gs behind Ls)
[to temporarily form transitory columns of 4 up/down with opposite roles facing in mini cols of 2 – have swapped inbound and outbound couples]
(~4) Outbound* couples MR 1/2x, WHILE inbound* dancers slide across to other side (L behind G)
(~2,~2) All MR 1/4x+, Ladies Pass Left up/down WHILE Gents MR 1/4x+ to face P

Here’s a video of a different but similar Wild Mouse ride than the one I rode as a kid. Note the complete lack of safety railings on the majority of the track – that’s what got me worried about flying off into the ocean when I was a kid.

First called by PERSON at VENUE on DATE