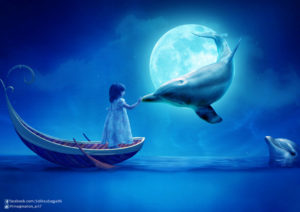 The title pretty much says it all. I was in a period where I was thinking about Dolphin Heys repeatedly, generating gobs of DH dances. Between this Duple Improper dance and two other 4-Face-4 compositions, From Here to Dolphinity and To Dolphinity and Beyond, I feel like I’ve got to where I wanted and the urge should finally be out of my system.

I’m pretty pleased with this – it incorporates some feel of the traditional dance Devil’s Dream plus the Down The Hall/Turn As Couple and Up The Hall/Cross Trail idea I found in The Campbells are Coming. Feedback from the first trial was extremely positive. I hope to get a chance to dance it someday! 😉

I think of this as a contra dance but it’s sort of a crossover contra/ECD composition… so I’ve labeled it as simply a longways duple improper here.

As this is an uneven dance, I recommend multiple shorter lines to give everyone a chance at playing dolphin. I start the walk through at A2 and finish with the A1 then have dancer couples swap places to retake hands four for a second quick walk through from A2 with the twos active. Reset and start at A1.

B1
Dolphin Hey, Centers/1s as couple passing solo LDY/RVN 2 by LEFT
[end with Centers facing down, Outsides facing UP]

Contra Variations (included only for completeness – I strongly prefer the above): Twos can stay put in B2 to anchor the set. Everyone could turn alone in B2 and omit the Ones Cross Trail into the A1 Balance (or Gypsy) & Swing.

From an ECD standpoint: A1 would likely be better as Gypsy & actives Two Hand Turn. The remainder would involve the ECD equivalents of the contra terms.