OpenVPN on Tomato with Android and Linux Clients

I’ve been wanting to do this for a very long time. When away from home I sometimes need access to the systems (or data residing on those systems) back at home. I wanted to set up a secure means to access the machines behind my router’s firewall and one of the most versatile and secure ways to do that is with a Virtual Private Network (VPN). The problem was that this stuff is pretty complicated and even though the open source firmware we run on our router has had a VPN-enabled version available, I’ve been loathe to try implementing it.

Well, the garage control system project I was recently working on had a hardware failure such that I could not implement it in the original way intended (until I replace the CAI WebControl board central to it). The board failed in such a way that it would not accept PLC programming but would still respond through the default web interface – which unfortunately is not sufficiently secure to expose to the internet directly. However, we were going away for an extended period and I needed to be able to access it while away. A perfect application for VPN technology, I could keep the “vulnerable” system firewalled behind the router and poke a secure hole through it using the VPN to control it from afar when needed. Just the shove I needed to get going on the VPN!

Curiously enough, in googling, I was able to find various basic tutorials about setting up a Tomato VPN-enabled router (which is Linux based) as a VPN server with Windows clients and creating the certificates and keys on Windows but pretty much nothing simple about doing so with other platforms like mine – Android (again Linux based), Linux and Mac. The ones about setting up a VPN with Linux all seemed to want you doing everything down in the weeds of config files and installing VPN packages on your own server (not a router). Not what I wanted.

The good news for you and me is that I figured out how to get this done with minimal effort and it pretty much worked perfectly on the first try, so I’m writing it up here for future reference and to share with any others following this path. Looking back, it wasn’t that hard but the lack of clear guidance made it all confusing. All that said, here’s some clarity on how to get it done:

Taking note of the instructions at http://openvpn.net/index.php/open-source/documentation/howto.html#pki, I did the following:

Copy the easy-rsa files to another location that will persist after package upgrades (note, this location already existed as a result of the openvpn installation and contained the single file update-resolv-conf, so maybe that claim is misleading?) and cd into that directory:
sudo cp -R /usr/share/easy-rsa/* /etc/openvpn/
cd /etc/openvpn

Edited the vars file using vi to set the KEY_COUNTRY, KEY_PROVINCE, KEY_CITY, KEY_ORG, and KEY_EMAIL parameters. These were at the bottom of the file for me. From what I can tell, the two email entries are identical but for the quote symbols. I presume the quoted one is meant to be the “real life name”, but nothing I could easily find via google confirmed or contradicted this – so I just set them both to the same address.

I then completed the rest of the steps at the above link using root/sudo priviledges, creating the certificate authority, server certificate and key and then the client certificates and keys. What I found online was not very informative on this point, but the Commmon Name (CN) must be entered each time you build these items and should be varied so as to be descriptive. So, for each command:

./build-ca
For this I specified my own name as the Common Name (I’m my own certificate authority) and it generated two files, ca.crt and ca.key (note, these are not named after the Common Name given, unlike the following).

./build-key-server ServerName
I gave my intended VPN server name as the ServerName which it then used as the Common Name and generated ServerName.crt, ServerName.csr, ServerName.key plus a 01.pem file and changed the index.txt and serial files in the keys directory.
NOTE: I also here encountered something different than that laid out at the above URL, for each key it asked me for:
Please enter the following 'extra' attributes
to be sent with your certificate request
A challenge password []:
An optional company name []:
which I simply clicked Enter through (I presume to set as blank, as no password was later asked for).

./build-key ClientNameHere
I gave unique descriptive names for each client and it created similar files to the server ones above, named per the client names I gave, created sequentially numbered pem files and updated the index.txt and serial files.

./build-dh
Returned Generating DH parameters, 1024 bit long safe prime, generator 2
This is going to take a long time
(But it didn’t – it was less than 5 seconds on my main Linux 64 bit workstation)

In the Arch Linux wiki entry for EasyRSA it stated that there was a need to convert the server certificate to an encrypted .p12 format for use on Android. I found this to not be needed, using the OpenVPN for Android client from the Google Play Store.

In order to provide additional TLS security and to protect against potential denial of service attacks against my router/VPN server I also set up an HMAC signature:
openvpn --genkey --secret ta.key

Setting the server and clients up…

As I created all the certificates, keys, etc. on my main Debian workstation, I needed to transfer those files to the associated machines. First I used my browser and the Tomato-powered router (VPN server) web interface to set up the VPN server following the info here *except* for using TUN instead of TAP. Installing Tomato is covered in my other blog post. Here’s screenshots of my settings (click on them to enlarge): 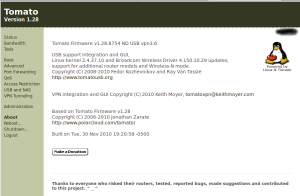 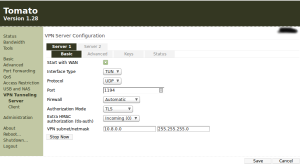 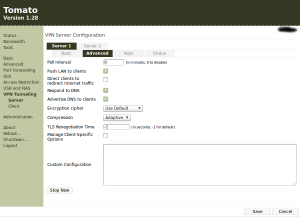 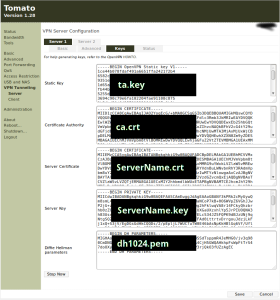 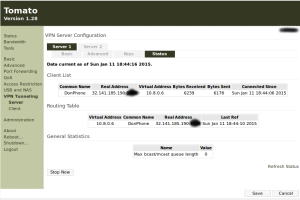 Connecting with a Linux machine. I then set up the test client on my Mint LMDE/Debian laptop following the leads at https://support.hidemyass.com/hc/en-us/articles/202721596-OpenVPN-Setup-with-Network-manager-on-Linux-Mint-Mate , which dragged along a bunch of other required packages including openvpn, easy-rsa, etc. I imported the certificates and keys when setting up the VPN connection using NetworkManager. Trying to connect via this initially failed. I thought this might be because I was on my home network at the time, so I proceeded to set up my phone as a client to see if I could use the cellular network to test outside access.

Connecting via Android. I installed OpenVPN for Android from the Google Play store onto my cell phone. Copied over the certs and keys to my phone using USB cable and set up the connection in the app. Took a bit of twiddling to figure out where everything went and which boxes to check, but it connected quickly once set up. Could access private resources behind the router firewall now! I went on to set up my Android tablet with the same app.

Connecting from an Outside Network. Brought my phone, Linux laptop and Android tablet for a drive to find an available Xfinity Wi-Fi connection. Tried each client to access the VPN once connected to some poor folks’ wireless access point (why folks stand for Comcast doing this, I don’t know), and they all connected quickly and could access my Garage Control System web interface on my home network… success!

Note that in none of these set-ups did I need to edit or create any configuration files manually on the clients or server, despite lots of other tutorials making great points of this! It appears each of the OpenVPN server and client implementations I used took care of this for me.

I’ve found the disconnect option in the VPN menu under NetworkManager and that can be used to drop the VPN connection. The Android clients have a connection status entry in the notifications list which provides a disconnect option once clicked on. All good to go now!

10 Responses to OpenVPN on Tomato with Android and Linux Clients