Caught a vintage base ball game in Harwich today.  Providence Greys vs. Olneyville Cadets.  Time warp back to 1884, where 6 balls are the rule and getting hit by a pitch just counts as one of them — you could be hit 5 times more before taking your base.  The overhand pitch has just been made legal.

It was an interesting event — many of the players came out to talk with the spectators before the game and shared the rules and their passion for the game with us and showed some of the equipment.  Lots of history too.  For instance, it turns out that in this year (1884) the Greys won the first of what became the World Series, taking all three games vs. the New York Metropolitans (yes, they still had to play game 3)! 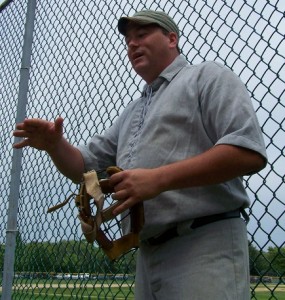 Then it was finally time to play ball!  The bats are really heavy and the balls very bouncy compared to modern equipment — add to that the lack of gloves for anyone but the catcher and you have a lot of activity going on.  What a great way to spend a Sunday afternoon. 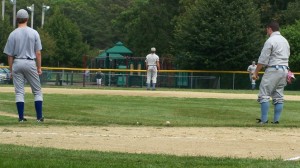 Waiting for a fielded ball

See http://www.newenglandvintagebaseball.com/ for more about this interesting topic.

This entry was posted in Travel and tagged base ball, Olneyville, Providence, vintage. Bookmark the permalink.