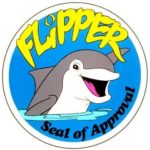 Shouldn’t this be a Dolphin of Approval?

Yep, I’ve been on a real Dolphin Hey compositions run – which led me to research the history of that move back toward its origin. It appears the Dolphin Hey first appeared in the modern era Scottish Country Dance Pelorus Jack out of New Zealand, named after a famous dolphin there. I saw the opportunity for this triplet to use the Dolphin Hey in essentially the same way as the original Scottish dance but with differences in the formation, set up for the move and the exit. While the Scottish dance is done with skipping steps to a particular jig, this triplet is intended to be danced with a typical contra/ECD walking step.

B2
All Partner Balance and Swing
[end Proper (as if facing up, 2-3-1 order) and face Partner across]

*Dolphin Hey: a hey for four traveling the path of a hey for three. One “couple” (in this dance, the Ones) travel as a unit while the other dancers travel solo. The couple stays in their respective orientation relative to the hall so they alternate the lead position as they travel the heys together, sweeping wide at the corners to trade the lead. In this dance that means Gent 1 leads up & out to the right, then Lady 1 leads the pass down & across the set, Gent 2 leads down & right and it ends with Lady 1 leading up and across the set toward the bottom. The pattern in this dance for the ones looks a lot like a Mac Command Key symbol